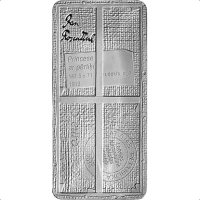 OBVERSE
The space imitating the back of the painting is divided into four fields. The top left bears facsimile signature of Janis Rozentāls, with the inscription "The Princess and the Monkey", measurements "147,5 × 71" and the year 1913 beneath it in an enclosed field; the words "canvas, oil" are placed to the right. The two lower fields carry a vertical inscription "5 euro" (on the left) and the seal of the Latvian National Museum of Art (centred and on the right) bearing the inscription LATVIJAS REPUBLIKA and the year 2016. 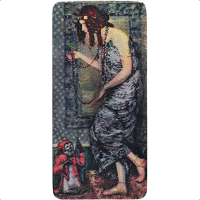 REVERSE
The reverse shows a reproduction of Janis Rozentāls painting "The Princess and the Monkey" (1913). In the painting, a lavishly dressed young woman and a monkey hanging on to her string of beads are outlined on an ornamental background. 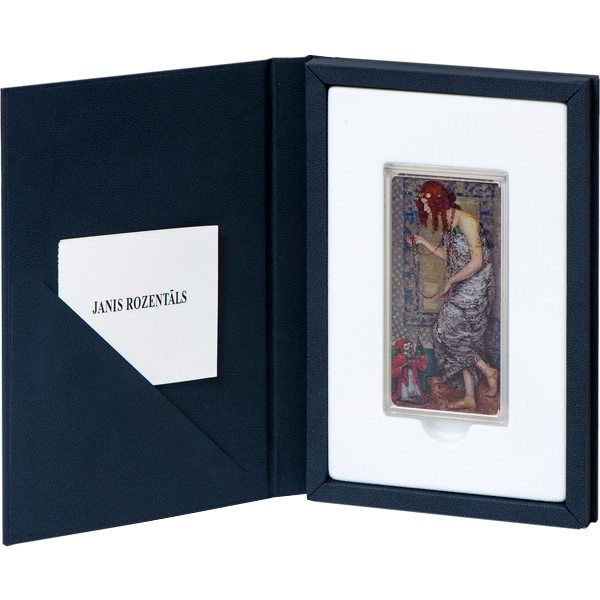 A quantity discount is applied to purchases of at least 10 coins of one or different types. This discount does not apply to numismatic items which already have a special price.
VAT is included in the price.
Janis Rozentāls
Face value
5 euro
Weight
62.00 g
Diameter
Shape: rectangle; measurements: 80.00 mm × 38.00 mm
Metal
silver of fineness .925
Quality
proof

The 150th anniversary of the outstanding Latvian painter Janis Rozentāls (1866–1916) has been entered into the UNESCO calendar of anniversaries, for this son of a Saldus blacksmith was one of the most important shapers of national art who modernised Baltic art, and earned recognition in Europe and prominence in local social life. As a striking symbol of national self-confidence of Latvian artists, his realistic diploma work "After Church" (1894, the Latvian National Museum of Art) upon graduating from the St. Petersburg Academy of Arts has been included in the Latvian Cultural Canon. The painting features the flow of Saldus churchgoers, with the possibilities offered by photography used in the artist's search for the right composition.

Janis Rozentāls became the most versatile artist of the turn of the 20th century, a popular and skilful portrait painter, a modern and enthusiastic proponent of the new aesthetic principles, whose creative activities influenced the development of painting, graphic and book art, theory and criticism of art. Constantly changing and perfecting his approach, he transformed the elements of impressionism, symbolism, art nouveau, national romanticism, etc. into genre paintings, landscapes, and compositions of religious, symbolic and fantastic character. Janis Rozentāls met his ideal woman, partner and model in the Finnish singer Elli Forssell (1871–1943), through her approaching the Finnish cultural milieu.

The largest version of the painting "The Princess and the Monkey" (1913), along with about 150 other paintings and over 100 graphic works by Janis Rozentāls forming a part of the collection of the Latvian National Museum of Art, is one of his most popular works and most eloquent testimonies to the synthesis of symbolism and art nouveau in the history of Latvian art. In 1913, "The Princess and the Monkey" was first exhibited at the Third Exhibition of the Baltic Artists Union at the Riga City Art Museum and after that at an international art exhibition in Munich's Glaspalast. The right to reproduce the painting was purchased by the German publisher Velhagen & Klasing. The artist painted the composition several times, varying the size and details, but the first sketch was done in coal and pencil.

The symbolic message of the painting "The Princess and the Monkey" can be translated in a variety of ways. The stylised, vertical painting features a lissom, lavishly dressed and decorated young woman with a little monkey hanging on to her string of beads. Among the possible models for the red-haired princess, both the Latvian actress Marija Leiko (1887–1938) and Finnish dancer Maggie Gripenberg (1881–1976) have been mentioned. Yet it is more likely that it was Gotho von Seck (1891–?), whom Janis Rozentāls had noticed at a carnival of the Kunstecke Society, who posed for the painting. Contemporaries perceived the "The Princess and the Monkey" as an allegory for an artist's dependence on society or art, which like a dominating mistress is playing with her servant.