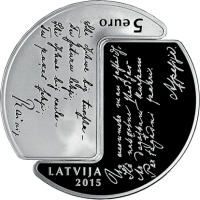 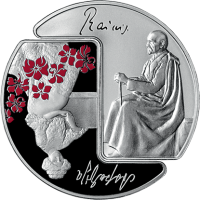 One-and-a-half centuries ago, two brilliant minds were born in the southern part of Latvia – the regions of Sēlija and Zemgale. Rainis (Jānis Krišjānis Pliekšāns; 1865–1929) was a Latvian poet, playwright, translator, journalist, politician with a degree in law from the University of St. Petersburg, and one of the most outstanding representatives of the New Current movement. Aspazija (Johanna Emīlija Lizete Rozenberga; as of 1897, Elza Pliekšāne; 1865–1943) was a poet, playwright, translator and public figure.

Because of his activities in the New Current movement, Rainis was arrested, forcibly settled in Pskov, and subsequently exiled to Slobodsk where, in 1897–1903, he was joined by Aspazija. Involvement in the revolution of 1905 as one of its ideologues put Rainis' life in danger and made him seek asylum in Switzerland, where he and Aspazija lived until Latvia gained independence. Life in the newly established country meant that in addition to his professional literary career, Rainis also became a member of the parliament as well as spent a successful year as a minister of education, lending his support to the establishment of the Depository of Latvian Folklore, the Latvian National Opera and the Open-Air Museum.

Both Rainis and Aspazija were engaged in enhancing the spiritual dimension of Latvian statehood. Their works contained vivid images of freedom visualised as red flowers, a sunny corner (Aspazija), a mountain climber, a man of the future, glass mountain, golden steed, and various mythological heroes – Antiņš, White Father, Lāčplēsis, Spīdola and Laimdota (Rainis).

Different in their poetic approach (Rainis – ideas; Aspazija – feelings), they were the most prominent couple in Latvian literature and culture. Rainis seemed to hammer his poetry and drama out of iron and steel, whereas Aspazija formed them out of pliant and gentle beeswax. As the wax melts, it spreads a sweet fragrance and the brilliance of sunrays, whereas the iron and steel serve to toughen the nation. This combination helped to bring about the miracle of Latvia's independence. The title of Rainis' most powerful collection of poetry – "The End and the Beginning" (1912) – reminds us that Rainis and Aspazija represent the end of Latvian classical culture (and literature) and the beginning of modernism.

Both Rainis (poem "Ave Sol!") and Aspazija shared the love of the symbol of the sun despite the differences in their views and artistic expression. The motif of the sun as a symbol of life, freedom and renewal runs like a red thread through the work of both poets. The sun is the most powerful source of the survival instinct in Latvian folksongs and mentality. The anniversary of Rainis and Aspazija is the right time to remember the spiritual landmarks of the nation and to attempt a new reading of Aspazija's lines:

"You are your destiny, your fortune and misfortune.
Deep rooted in the soil, you are your land."

€ 130.00
Not in sale Currently out of stock Sold out
Add to
Bag
Baroque of Courland
silver of fineness .925

€ 80.00
Not in sale Currently out of stock Sold out
Add to
Bag
Smith Forges in the Sky
silver of fineness .925